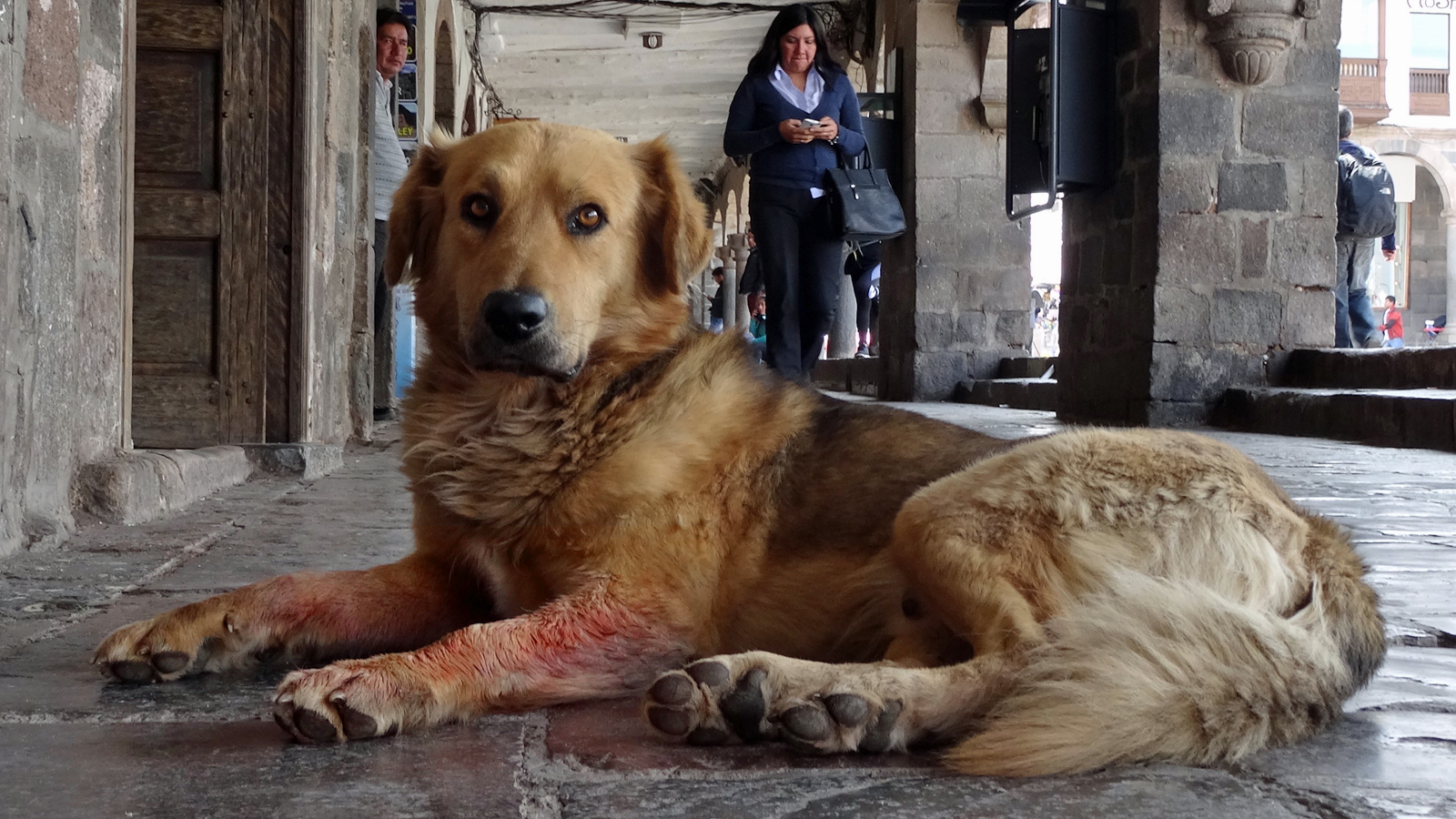 Share
With its train service to Machu Picchu, Cusco is the Peruvian gateway city to the famous Incan ruins. At the heart of Cusco is a splendid plaza ringed with Spanish colonial buildings and lawns strewn with friendly street dogs.

My wife and I had intended to find a cafe from which we could sip tea and gaze upon the plaza, with its splendid architecture, picturesque indigenous people and its perros de calle, or street dogs. But we'd only just entered the plaza when we saw the dog in the photo and changed our plans. The dog was standing in the middle of the street, blood on its front legs readily apparent even 30 meters away.

I spotted a policewoman and asked her in my shoddy Spanish if there was someone I could call to help the dog. She pointed at a travel agency. My wife and I entered it and I told a woman seated behind a desk that I wanted to help a dog. I pointed toward the shop's entrance as I said this. The woman hesitantly got up, walked to the doorway and peered out.

"That's only Gringo," she said with relief, as if his legs weren't glistening with blood. Sensing my concern, she said that Gringo wasn't seriously injured. He would be OK, she said, no problem.

As she spoke Gringo walked up and stood beside her. As the dog stayed at the front door, the woman returned to her desk, reached under it and brought out a bag of dog chow. Gringo was one of the street dogs she often fed, she said as she opened the bag.

About that time another woman entered the shop and within a minute she learned that my wife and I were there to help Gringo. The newcomer identified herself as Lourdes Tunqui. She said in broken English that she knew of a woman who was devoted to helping Cusco's street dogs and that she would call this woman on our behalf.

While her colleague searched for a phone number, Lourdes said she'd be calling Milagros Romero Peralto. Milagros, Lourdes said, headed a nonprofit group that fed homeless dogs and worked with veterinarians that tended to the animals. Milagros also ran a dog shelter out of her home, Lourdes said.

Milagros invited my wife and me to meet her at her home, an invitation we accepted. To save time, I suggested that we first buy stuff for Cusco's street dogs.

We hailed a station-wagon taxi and stuffed its cargo compartment with kibble. A roof rack handled the seven sacks of chow that didn't fit inside the car. And off we went to Milagros' home.

In fading light, we carried the chow from the taxi to an area behind the home as about 30 happy dogs greeted us with hand licks and kind eyes. We then entered Milagros' home and chatted in English with the energetic young woman. From her, we learned of events her group—Cusco Proteccion de Animales—had held with volunteer veterinarians to spay and neuter dogs.

The events her group held in the countryside were particularly important, Milagros said, because the poor who live there can't afford to spay or neuter their dogs and because taxis won't transport dogs, which rules out bringing them from the countryside to a veterinarian in Cusco.

"Our mission is to help dogs far from the city," Milagros said, adding that it's better to sterilize dogs than to allow them to produce puppies that aren't cared for. All too often, Milagros said, starving dogs in and around Cusco can be seen eating the corpses of dogs that starved to death. And, she said, some taxi drivers, tired of dodging dogs in the streets, have taken to running them over.

There's another reason to reduce the number of street dogs: The government killed them. Just two weeks before I photographed Gringo, Cusco's garbage workers put poison next to trash cans in the plaza. The workers returned later and tossed into trucks the bodies of dogs that had eaten the poison.

Gringo dodged a bullet that night. Now, every time I look at the photo of him and remember how he looked when I first saw him—standing in the street with blood-slicked legs—I hope that he's all right.