Devoting Their Lives to Rescuing Dogs 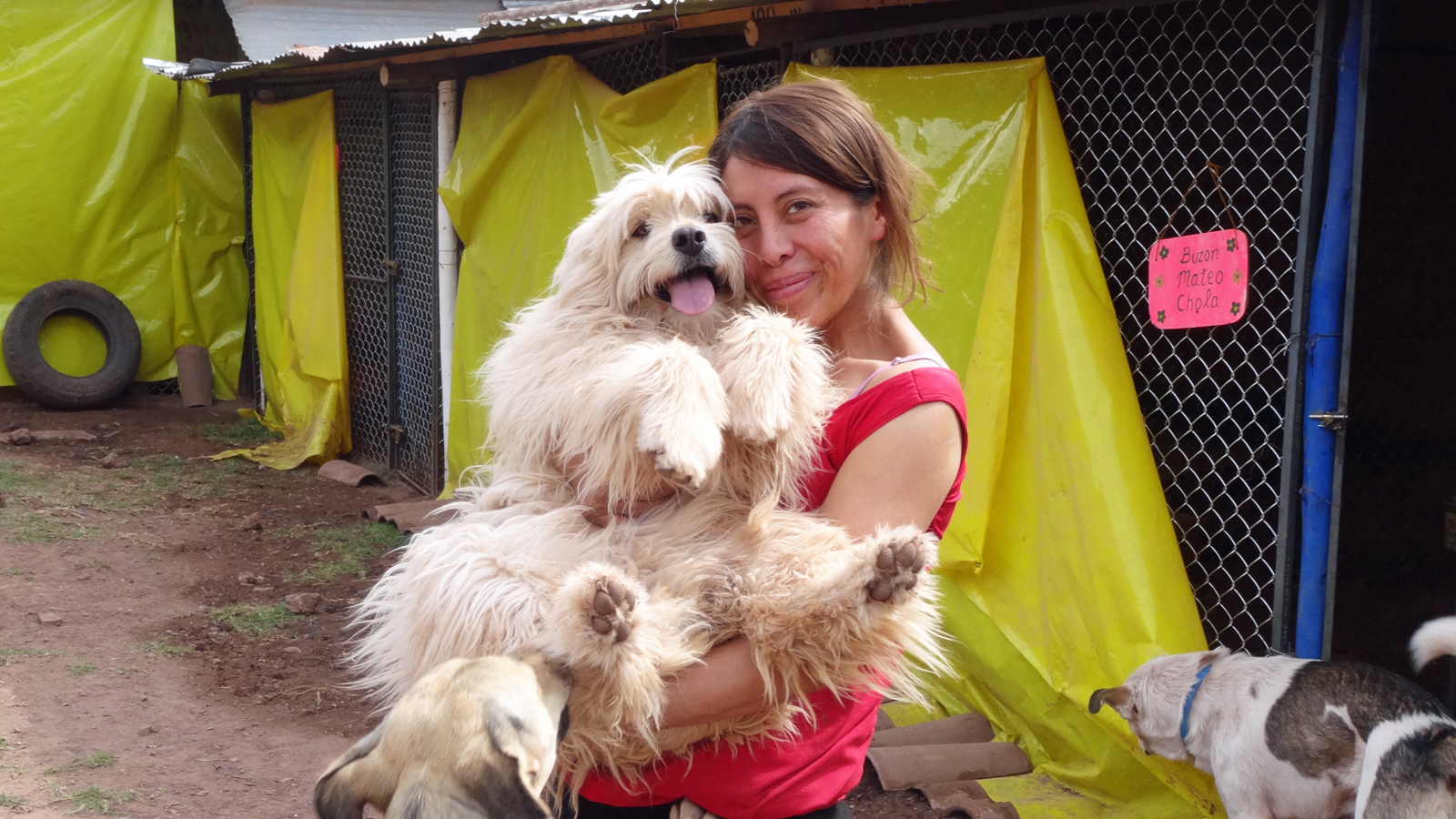 Share
To say the street dogs of Cusco, Peru, are plentiful is like saying the Himalayas are hilly. The dogs are everywhere. All need food and some need medical attention. Perhaps no one in Cusco is more aware of the dogs' needs than Mayte Carreno Flores (pictured).

Mayte was 16 when "a dog collided with a car," as Mayte put it. Mayte brought the animal home and nursed it back to health. In the months that followed, Mayte rescued six more dogs. In the years that followed, she'd help more than a thousand.

The couple cares for another 10 dogs being housed at a veterinary clinic, as well as 15 cats, two parrots and a cow. All needed help.

Angelo owns an old pickup truck. It appeared to me that the truck and some modest belongings are Mayte and Angelo’s only possessions. The couple devotes nearly all of their time, energy and money to rescuing animals.

Theirs is a story of great personal sacrifice to help some of man’s best friends. Among them is Renaldo, a little black-and-white dog with a strange swagger. Renaldo's owner was a drunk who liked to beat the dog with a club, Mayte said. One day, when the pooch was just 5 months old, the drunk hit Renaldo so hard that he broke the dog’s back. Angelo performed physical therapy on Renaldo for more than a year before the pup was able to walk again.

Then there’s Anita, a cream-colored 5-year-old that resembles a schnauzer, a breed worth money to some Peruvians. Anita’s owner bought her for breeding, but as the dog got older it became clear that she wasn’t a pure breed and Anita was tossed out on the street.

Anita became so depressed and anxious that she chewed off much of her left back paw. When Mayte and Angelo got her, they realized the dog had profound abandonment issues. For the next year they never left Anita’s sight. She ate, slept, and even watched TV with them, Mayte said.

Mayte and Angelo try to find homes for the dogs they rescue, but Anita, they said, will likely be with them until the end. The couple fears that if the little dog is given up for adoption, it will again self-mutilate.

Every dog at Soy Callejerito has a sad history, and I heard many but I will repeat only one more: The story of Choco, a big, sweet-natured shaggy dog. For years Choco lived on the streets near the university in Cusco. Twice a year she produced puppies that nobody wanted. Some students began giving Choco anti-pregnancy injections, not knowing that other students were doing the same.

Angelo met Choco while speaking about dog care at the university. He noticed that Choco had a uterine infection and took her to a veterinarian, who removed a large infectious mass. The vet also diagnosed kidney failure, which he blamed on over-exposure to anti-pregnancy drugs.

Mayte and Angelo suspect Choco will remain with them till the dog passes away. After all, no one wants an old dog with failing kidneys.

I commend Mayte and Angelo for their devotion to helping stricken animals that no one else will help. No one, that is, except a few other Cusco residents and the occasional tourist who learns about Mayte and Angelo’s work through Facebook or, in my case, a local travel agent I met while walking around Cusco's dog-filled main plaza.

After seeing the shelter, I asked how I could help. That led to Mayte, Angelo, my wife and me making two trips in Angelo's truck to a supermarket, where I gladly bought about 1,600 pounds of dog chow.

When we parted, Mayte gave me a hug and whispered in my ear, "I will always remember this day." I hope I will, too.